Not being a TV advertising specialist, I have been dodging this subject somewhat, but I keep seeing pieces about it pop up here and there and I couldn’t help but throw my hat in the arena and hopefully bring a little clarity to the scenario as I see it.

Now first, let’s make sure we’re clear what it is we mean by the death of TV. Because I think some writers and influencers are mixing up the death of television use as a device, and television as an advertising medium. I actually saw an article recently in which the author was shocked by the statistic that 70% of Netflix viewing happens via a TV screen. Now I personally don’t find that shocking at all.

While I know that with the rise of streaming and on demand services, general live stream TV viewing figures have dropped incredibly, I don’t think it has ever been suggested that television in terms of device use was on the decline?

As a device, the TV is still a central entertainment hub for many even for Millennials and the upcoming Generation Z. It’s simply the viewing habits that have changed. Set top box recording and on demand services as well as the countless internet video streaming services via very affordable devices and subscriptions means that far less live TV is being watched, not that we’re using our TVs any less  overall.

Netflix has now grown to the point of near passing the 100 million subscriber mark. With a near 50/50 split between the US and international audience, which shows they are going to be a major international influencer and not just a US trend setter. 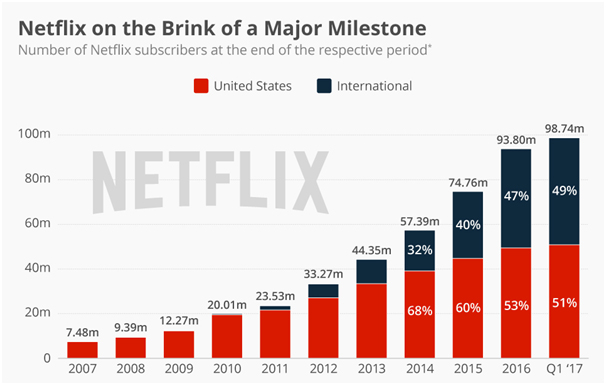 What’s important from my perspective though, is that we understand that it’s not just down to a loss of scale. TV advertising is still one of the most significant advertising channels in terms of overall scale. I won’t quote exactly as I’m not sure how reliable it is, but I recently saw a stat showing that one prime time 30-minute episode of Judge Judy amassed more views than an entire day’s worth of You Tube views.

So, it’s not as if television advertising and overall viewing has become insignificant overnight. The reality is that our approach to advertising has dramatically changed in the last 10 years. Now that’s a bit of a cheesy sweeping statement but what I mean by that is that with rise of digital social media platforms, YouTube etc. Advertisers have the ability to produce highly targeted low wastage campaigns to very specific niche audiences. Something TV advertising simply cannot offer.

While you may be able to strategically look at time slots and program association to reflect your target audiences interests as a larger group, it’s not the same as being able to target by age, gender, geography and a variety of interests and online associations with an RTB edge.  For any marketer in touch with digital, television advertising while still offering scale feels prehistoric in terms of its delivery and buying.

What’s also shifting in more recent years is the consumer tolerance to video advertising both built into video platforms like YouTube but also directly into social media feeds on desktop and mobile devices. All effortlessly delivered with auto play features. So that rich video message delivery that only television could previously provide, is now a widely available and easy to deliver creative format. Mix in to that equation the ability to delivery live stream social media feeds and both Instagram & Facebook story-based systems and you’re again allowing for what is or feels like a live real time video feed to capture the moment.

Before I get too carried away… some summary notes to conclude:

Television is far from dead, it’s just changing and as such the decision to include television advertising in your strategy needs to be carefully considered for cost efficiency vs other avenues. Expect streaming service platforms to begin offering audience targeting advertising placement alongside on demand video entertainment in the years to come. As viewing trends continue to shift, I would be interested to see if even Netflix consider a free membership service which includes advertising placement as a trade-off. We’ll have to wait and see!

Be part of the story

If you don’t ask you don’t get.
Go on get in touch!